The following is a good example of creating your own operators. In the two years since first writing this, I have not found an actual use for this, but it appears to be a common operator in Ruby, and has been implemented several times in Swift.

(‘func isLessOrEqualOrGreater’ just wouldn’t work half as well. Also, please note that at the time I copied this code – which was working – without stumbling over if… if, which is not a good construction.)

This is a good example where obscure symbols make code easier to read; something else to keep in mind.

Personally, I would prefer to return an enum:

or maybe, as suggested here,

That led to a surprise. I tried this in a playground, and was promptly innundated with errors 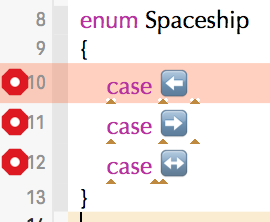 It seems as if Xcode parses ➡️ as -> and tries to use it as an operator. Good to know.

I have, out of sheer stubbornness, settled for a set of emojis with similar aesthetic, but slightly inappropriate wordings: back, on!, soon. 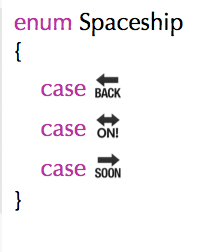 Paste that code now, and it explodes in errors.

which, spoiler, does not solve any of the problems.

The correct code is

(this needs to be declared at global level)

In production, I would not use emoji, but here they illuminated an interesting Xcode quirk, and I did actually find it easier to work out what I wanted to return than I did with Ints or Strings.