The Strange Case of initialFirstResponder

I’m filing this under the ‘bug reports’ tag though I think it falls under ‘expected behaviour’, but this is a bit of a knotty problem.

I had an app with a notecard, which has a title (NSTextField) and a body (NSTextView). I wanted the title to be first responder. Sadly, my body had a cursor blinking happily, even when I moved the title field to the top and left of it, and instantiated it first in IB. (In my app, this viewController is nested several layers deep in split views, but it doesn’t work properly in an app with a single viewController, either.)

Attempt #1:
body.resignFirstResponder() respectively title.becomeFirstResponder(). The documentation says ‘never use these directly’, but at this point, I wanted a proof of concept. Spoiler: Whether in viewDidLoad or viewWillAppear, this had no effect whatsoever.

and set its isResponder property to true in the end of viewDidLoad. Voila, my titleField was first responder.

Any time you’re finding yourself tieing your code into knots just to achieve something, you’re probably going about it the wrong way. Most Cocoa coding is relatively straightforward; making a designed-to-be-interactable class temporarily nonresponsive before sneaking into the getter of a read-only variable by a back door is NOT a good way forward. Don’t do it.

Attempt #3:
Create an NSWindowController subclass, associate it with the main window, and use the following in windowDidLoad()

This seemed to work in one instance, and then failed in the next. The ‘who is my first responder’ behaviour mirrors the Attempt #2. This can be observed in the screenshot: using makeFirstResponder means the correct field is logged as first responder, but the cursor is in a different field. 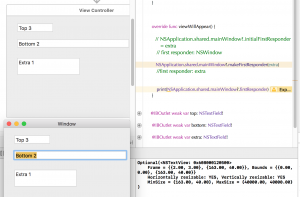 Documentation:
There’s an ‘initialFirstResponder outlet in IB, but you cannot hook it up with items in different viewController scenes. In the good old days of nibs, this worked; but with storyboards, nada.

Otherwise, I found a lot of advice to set initialFirstResponder in viewWillAppear. Which I had.

Solution:
Eventually – and I can no longer find the source, I read A LOT of articles yesterday – someone mentioned window restoration in passing.

And to add a cherry on top: build schemes have a ‘launch application without state restoration’ setting; which makes four places that you need to check:

– window.isRestorable in code
– Behavior: Restorable in IB
– launch application without state restoration in the build scheme
– close windows when quitting an app in System Preferences

That is an iOS tutorial, but it’s worth following up on this.

https://developer.apple.com/videos/play/wwdc2011/119/
deals with Resume and AutomaticTermination in Lion – macOS 10.7; turns out that isRestorable has been default since 2011… and I never noticed. (It is not fully implemented; it works for quitting applications, but not for closing the application’s window.)

Right now, this technology is not my priority, but ‘first introduced in 2011’ says everything you need to know about whether you should adapt it in your own app. There are apps where this is not necessary – my menu bar app with a fixed window size, for instance – but this is behaviour users expect, and 2011 to now is long enough that one should adapt this technology.

I don’t think I have ever heard it mentioned in any kind of depth in all of my years of reading programming books and articles and watching videos. Preserving state on iOS is a topic that gets mentioned more frequently – this is the nature of the mobile device – but for desktop, the most I’ve heard was ‘save the state of your app to NSUserPreferences’.

Lesson learnt:
My instincts about ‘I’m doing this right, I’m just missing something’ were spot on: I *had* missed the ‘window restoration’ layer of this problem. Given how useful window/app restoration is, I will roll with it (eventually), and operate on the assumption that I do not know which field my user has made first responder, and I should not care. This becomes a UI issue, but now I am warned, and I can plan ahead.